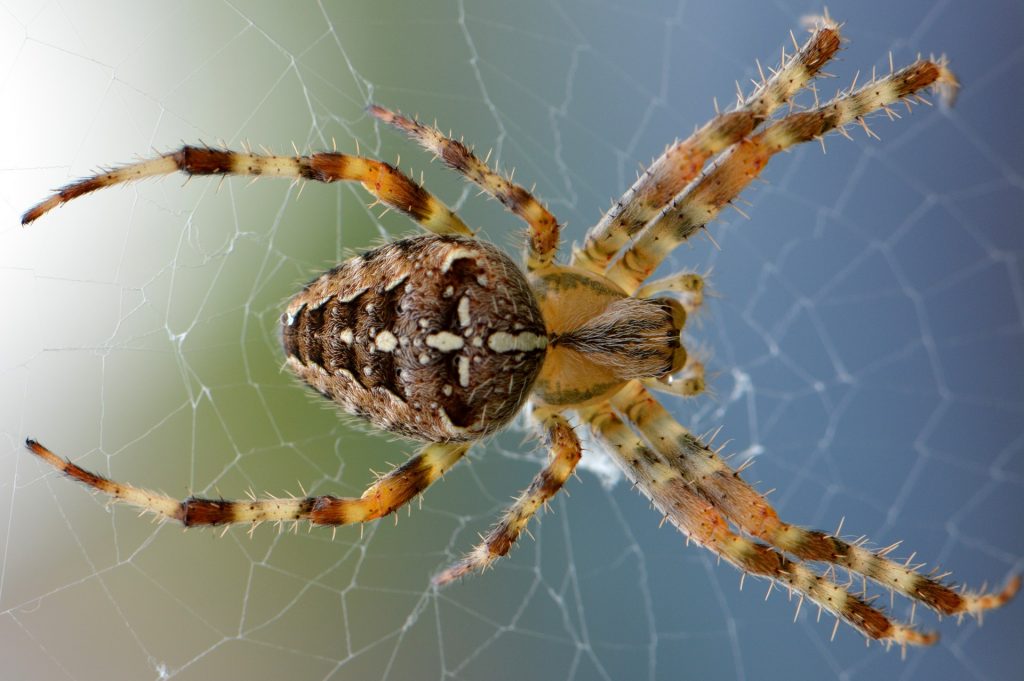 Just hearing the word “spider” makes many of us flinch. Although these insects are not pests but are themselves exterminators of pests and can therefore be seen as natural pest controller, some are quite scared of them and start screeching or run away in panic when they see a spider or if one comes too close.

Yes, for most people they are not beautiful to look at, but these arachnids are as important to nature and the environment as any other. And if the fear is not too great, it is also worth catching an invading spider and releasing it outside.

The benefits of spiders

If you find a spider in your home, it may be a little shock at first, but these animals love to eat flies, mosquitoes, moths, etc. and keep the home free from these pests. Moreover, even agriculture benefits from this, because thanks to spiders they have to use less chemical pesticides to control any pests on their crops.1

But spider silk is also a very interesting natural material. Researchers have been trying to solve the mystery behind it since the 80s. It is razor-thin and 5 times more tear-resistant than steel. For example, a rope made of spider silk with a diameter of 1 mm could carry a person weighing 80 kg.2
A few years ago, the first mass-produced garment made of synthetic spider silk also came onto the market, an outdoor jacket that is very light and robust.

But the poisons of spiders are also interesting for researchers. Extrapolated to all known spider species, millions of active ingredients are contained in the spider toxins, which may be helpful in the treatment of diseases in human muscles and of the nervous system.3

As already mentioned, spiders are basically not pests, such as cockroaches, mosquitoes, ticks and other such insects. They neither eat/spoil our food, nor do they produce allergens or spread diseases.4

Only a few spiders pose a real danger to humans. The tarantula is wrongly considered the most dangerous spider, but it has a weaker poison than, for example, the black widow, funnel web and brown recluse spider, the deadliest and therefore most dangerous of all spider species.1

Basically, spiders only bite when they feel threatened. Most bites go unnoticed, because many spider species cause little or no damage with their claws, therefore they only cause slight skin reactions such as inflammation, slight swelling or itching. However, this varies greatly depending on the spider species. In all cases, the wounds should be disinfected for safety reasons and treated by a doctor if uncertain.

Allergy sufferers should be careful in any case, because the injected poison of some spider bites can cause allergic reactions, similar to other insect stings.5

A more well-known and widespread problem that spiders cause is the fear that we humans have developed towards them. In Europe, about 35% of the people suffer from arachnophobia. Affected persons react with fear and panic at the very sight of a spider and in a worst case develop tachycardia, attacks of sweating or breathlessness. And that, even though one rarely faces a really dangerous spider.6

Properties and characteristics of a spider

Worldwide, approximately 46,000 spider species are known so far, but researchers are certain that not all species have been discovered yet.3

Life cycle of a spider

Each spider species is different, but all have the same general life cycle and develop in three stages from egg to spiderling and finally to an adult spider. The details of the developmental stages vary from species to species, but basically, they are all very similar, as are the mating rituals.

Mating: In order not to be mistaken for prey, the males must approach the females carefully. The misconception that the males are eaten after mating is not true, most spider females do not eat their partners.

The females then store the sperm until they are ready to produce eggs. The first step is to construct an egg sac from spider silk, which is tough and weatherproof to protect the offspring. Only then are the eggs fertilised and laid into that sac. Depending on the species, the female spider lays a few or several hundred eggs.

The egg: It usually takes several weeks for the spiderling to hatch from the egg. Depending on the climate zone, the eggs in the sac can also hibernate. Some spider species lay the egg sac in a safe place and leave the eggs to their fate, while in others the spider mother guards the sac until the young hatch. Females of the wolf spider even carry the sac with them until the eggs are ready to hatch, then the mother bites open the sack to release them. Especially in this species, the mother spider carries her offspring on her back for up to 10 days.

The spiderling: The immature spiders are called the spiderlings. These look like their parents, only much smaller when they hatch from the egg. Immediately after that, the spider children spread out and crawl away, but other species also fly away, which is called “balooning”. To do this, they first climb a branch or other elevation, lift their abdomen and expel silk threads, which are carried away by the wind together with the spider. Some spiders can only cover short routes in this way, but others fly very long distances. 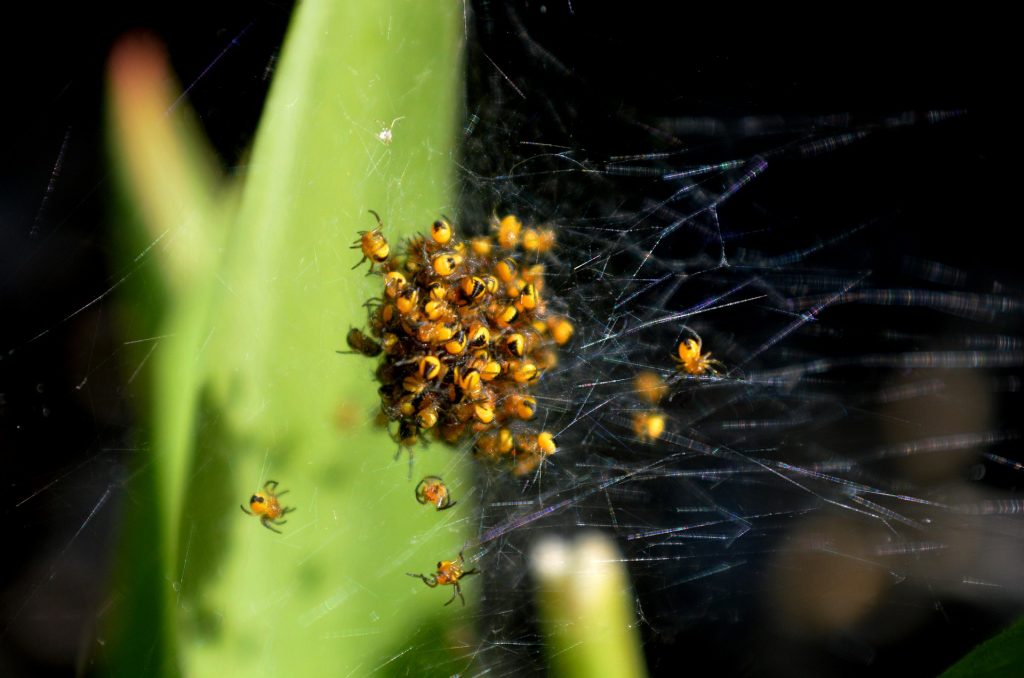 Spiderlings in a nest ©Pixabay/neelam279

Young spiders are still very vulnerable until they are fully grown and the exoskeleton has fully formed. Most spider species are fully developed after 5 to 10 moultings. In some species the male is fully grown when it leaves the egg sac whereas female spiders are always larger than the males and therefore need more time to mature.

Adult spider: When the spider has fully developed and is considered adult, it is ready for mating. Females generally live longer than males, who often die after mating (the reason why they die depends on the species). Most spider species live one to two years, although this naturally varies from species to species.

Tarantulas, for example, have an unusually long life span. A female can live for about 20 years.7

Anatomy of a spider

All arachnids have mouth parts called chelicerae and eight legs.

The order Araneae refers to the web spiders among the insects/arachnids. They have two basic body parts, the cephalothorax and the abdomen. The cephalothorax is composed of the eyes, jaw claws, mouth parts, venom glands and is the body part to which the legs are attached. The abdomen contains the spinning glands (organs through which silk is expelled), the heart, the digestive organs and the silk glands.

Most spider species have eight eyes, in two rows of four in a straight or curved alignment. Depending on the family or spider species, the eyes only function as light receptors to distinguish day from night, but some species have also evolved, allowing them to see a little sharper and perceive colours. The number, size and arrangement of the eyes is usually very different and is very helpful for identification.

At the end of the mouth parts are the two fangs with pores at each tip, through which the spider venom can be injected into the prey.

There are four or six spider glands at the rear end of the abdomen. At each spinneret is a row of cones through which silk can be ejected. This is used to line burrows, wrap eggs in a sac and mark paths so that a spider can find its way back to its hiding place. Web spiders also build labyrinths of silk or a flat net to catch prey.8 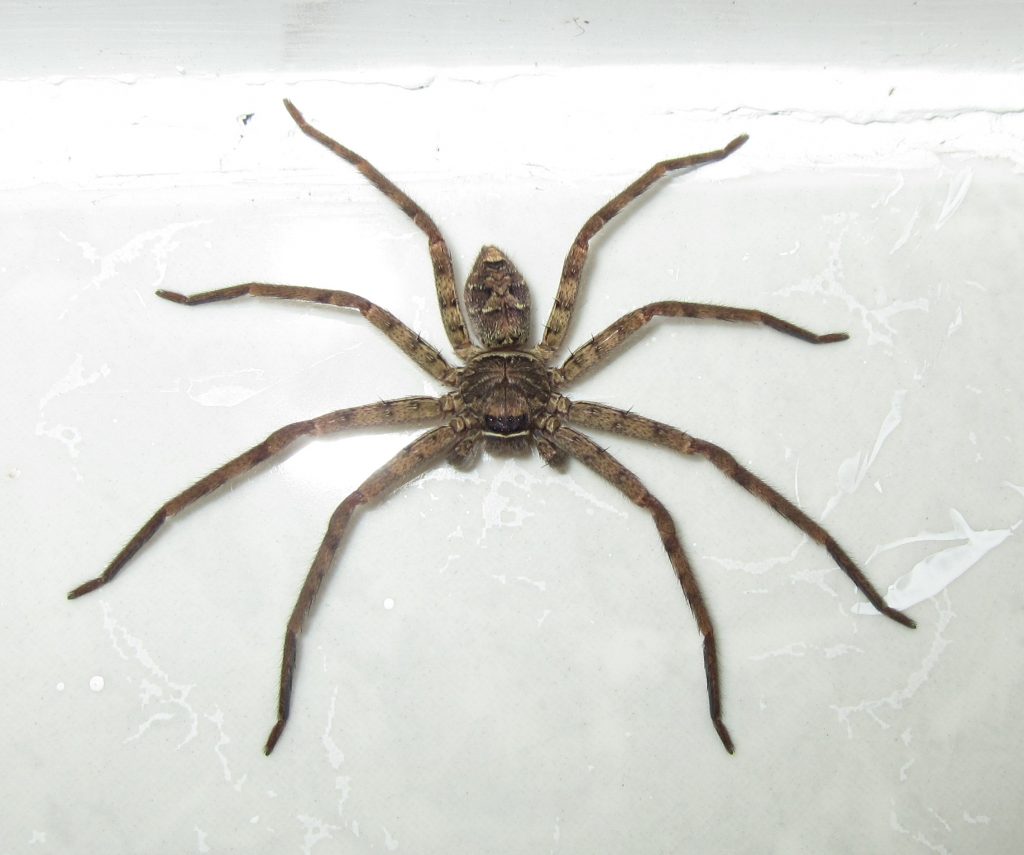 If you are uncomfortable with spiders being in and around your home you consider keeping them well at arm’s length by applying one of our products, Bio/Clean Kill Classic and Bio/Clean Kill (Extra) Micro-Fast. These can be used for prevention. Every few weeks treat all corners, joints, cracks, crevices and places where these arachnids like to stay and rest, helps to keep the crawling animals away.

The products can also be used in case of an acute problem. Depending on the size of the spider, the knock-down can begin after a few seconds to minutes. 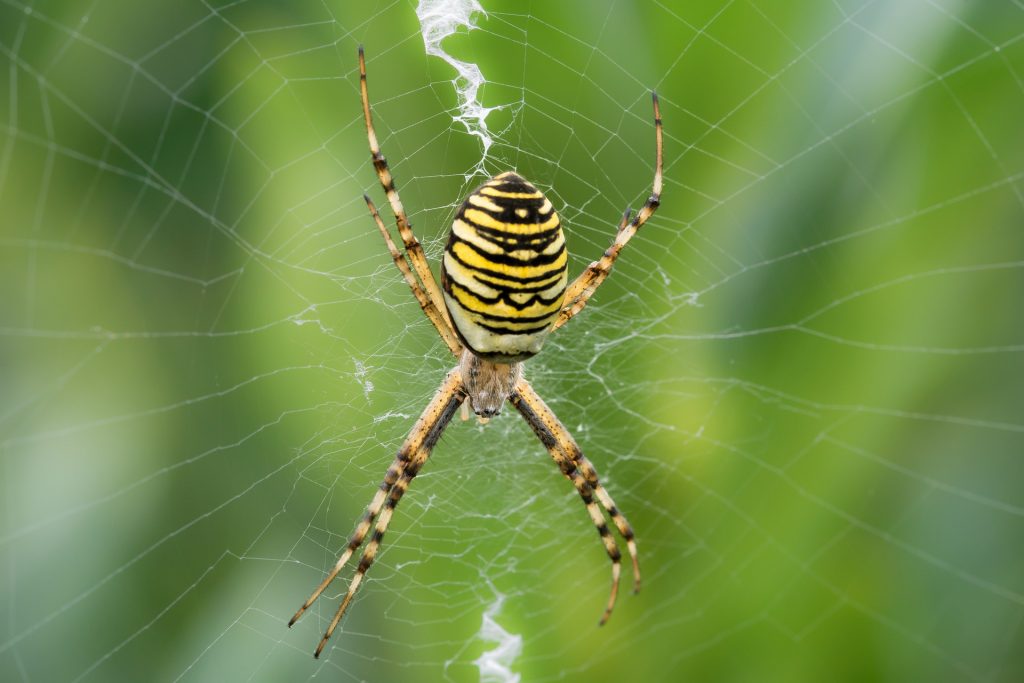 Spiders are probably one of the most interesting and, along with bees, one of the most useful insects of all and are rightly not classified as pests. Their presence does not pose a hygiene problem, nor is there any known transmission of disease by spiders.

Where there is no danger of poisonous spiders or allergic reactions to spider bites, these eight-legged creatures should be carefully transported outside. Otherwise, and in case of imminent danger, Bio/Clean Kill can be used.