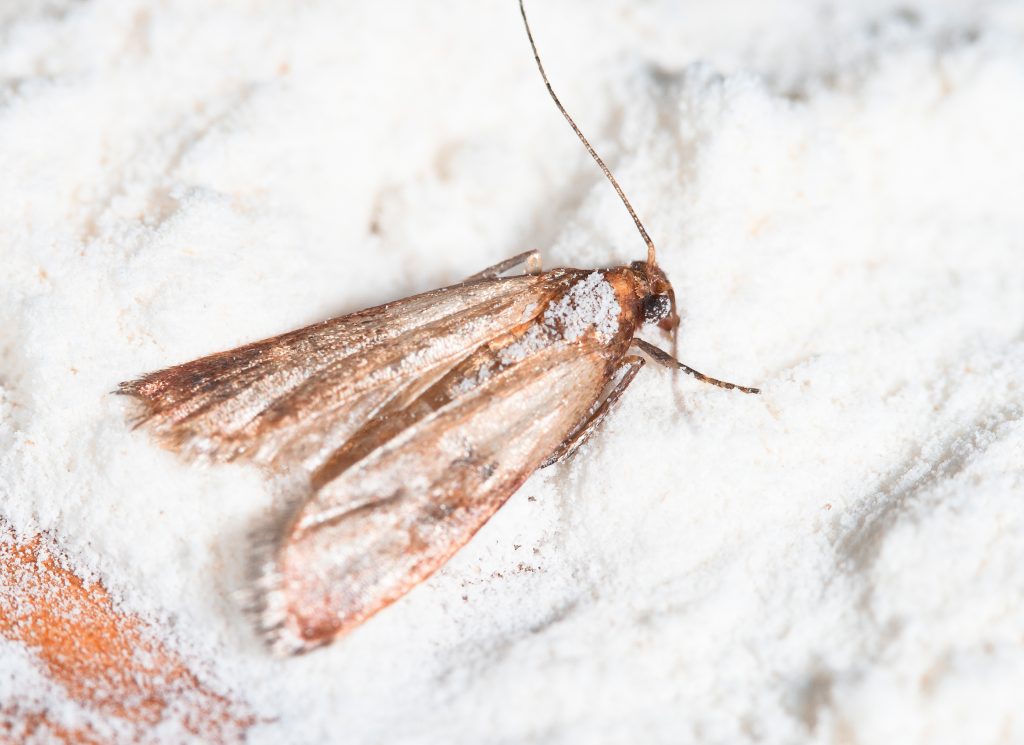 Moths are the black sheep among the butterflies. Some species are simply annoying when they fly into our home as they are attracted by artificial light and flutter around nervously. But other species are harmful and either cause holes in our clothes or contaminate and spoil our food, which must be disposed of immediately. But even if you might not believe it at first glance, these insects also have their special role in the ecosystem.

Moths are a good food source for a variety of animals, such as other insects, spiders, frogs, lizards, mice, bats, etc. The caterpillars are also very important for the rearing of young birds.

Moth caterpillars, also called larvae, have a great influence on nature. After eating the leaves of plants, many plant species developed special chemicals to make them less attractive for the caterpillars. But moths also like flower nectar and so they help with pollination.

Since moths are widespread, occur in different habitats and are very sensitive to changes, they are important indicators of nature’s health. Their number and distribution can provide important clues to changes in environmental parameters, such as air pollution, climate change, etc.1

The dangers of moths

The products that have been contaminated by moths should be disposed of immediately, because consumption can lead to allergies, skin diseases and gastrointestinal disorders.2

Moths can spread very quickly and find shelter in the smallest corners. They also successfully eat their way through plastic films or other types of food packaging.3 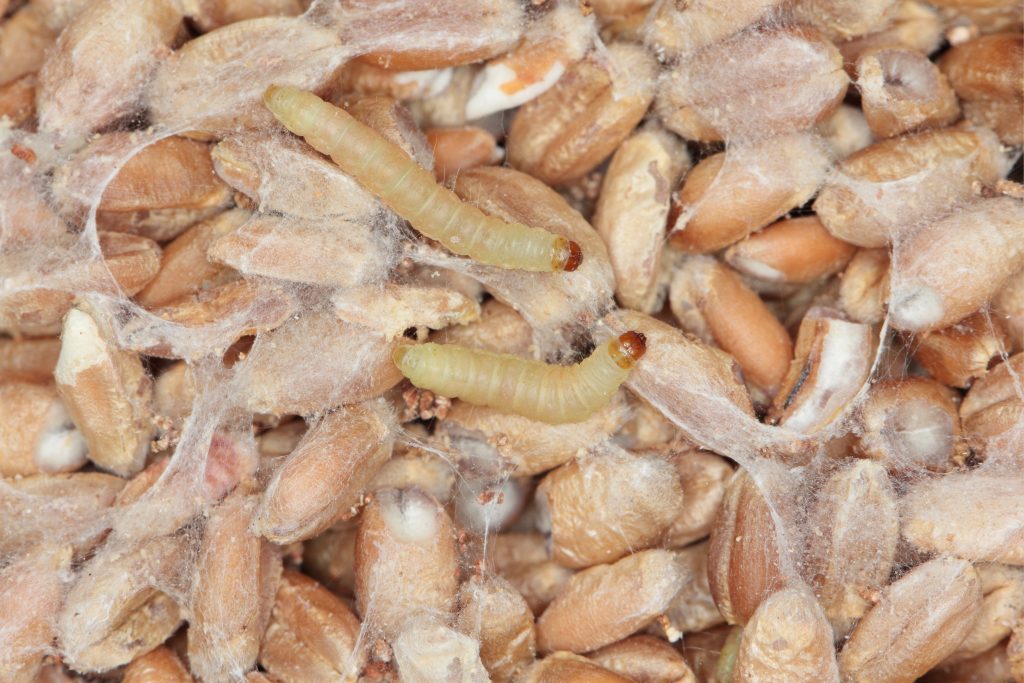 Properties and characteristics of moths

There are over 2,000 species of moths in the world4, but in our report we focus on the harmful food moths. There are several species and we would like to describe some of them in more detail.

Behavior: As the name suggests, this moth prefers cereals such as barley, rye, corn, oats, etc. It infests both dried grain in storage and cereal crops on the field. If small holes are found in corn or wheat, this can be an indication of infestation. Since the Angoumois grain moth is also active in cooler temperatures, it can also cause damage in winter.5

Appearance: The adult moth is small, yellow-brown or light brown and has a wingspan of 13 to 16 mm. The hind wings are grey and become narrower towards the tip. The front and hind wings are lined with fine fringes.

Biology: Females lay an average of 40 eggs during their life. They lay them on or near grain. After about four to eight days, the larvae hatch and bore through the grains, where they feed and develop. In two to three weeks they go through three moultings and then pupate within a grain in a silken cocoon. The adult moths hatch after about 10 to 14 days. The life cycle from egg to egg takes about 35 to 49 days.6

Behavior: Their food includes cereals, dried fruits, seeds, nuts, chocolate, dried animal food, etc. This species is possibly the most common food-contaminating moth and is known throughout the world. Dried fruit moths can also be introduced from outside, e.g. by nuts collected from the garden.7

Appearance: The adult moths have a wingspan of 15 to 19 mm. The wings are copper colored with a wide grey band near the point where they attach to the body. The larvae are white, pink, brown or light green and about 13 mm long. The head and the tip of the first body segment behind the head are reddish to yellowish brown.

Biology: The adult females of the Indian meal moth lay 100 to 400 eggs on larval food at night over a period of 1 to 18 days. After 13 to 288 days the larva is fully developed.8 They can travel a certain distance to pupate in hiding places. At dusk the adult moths become active and wait for mating in certain areas, such as walls. Adult moths live for about six days.9 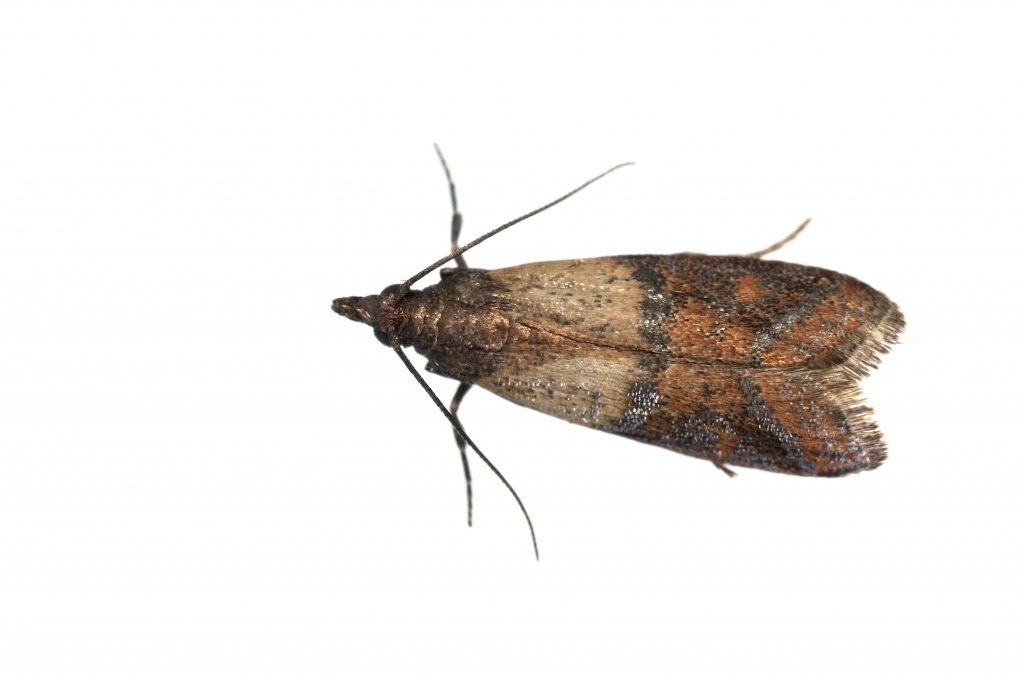 Behavior: This moth species infests besides flour also a variety of other foods, such as nuts, chocolate, seeds, beans, dried fruits, stored food and even the brood combs of honeybees. The Mediterranean flour moth is a serious pest in mills and warehouses, where it clogs the machines with its webs. These must be shut down occasionally so that the moth’s webs can be removed.
This type of moth is nocturnal and moves quickly in a zigzag pattern.

Appearance: The adult moth has a wingspan of less than 25 mm. The hind wings are dirty white, the front wings pale grey with dark zigzag-like patterns on them. These patterns disappear when the wings are worn out.10

Biology: The females lay 116 to 678 eggs in flour or other food. After three to five days the larvae hatch. They feed in the silk tubes they build and mature for about 40 days. Then they pupate inside these silk cocoons in clean food, far away from infested products. The pupation phase lasts eight to 12 days. After 8 to 10 weeks, the entire life cycle of a Mediterranean flour moth has been completed.11

Food, such as flour or other cereal products, should already be checked for holes in the packaging or contamination in the supermarket. It is also advantageous to refill the endangered food immediately after the purchase into well sealed cans or other containers. These should also be inspected occasionally.

Infected grain has a disgusting smell and an inedible taste. Infested food can be recognized by the residues of the moths (excrement and webs), which can usually be found on the surface of the grain.5

However, to be completely safe from moths, we recommend regular use of Bio/Clean Kill Classic or Bio/Clean Kill (Extra) Micro-Fast as a preventive measure. Our products can be used every few weeks in places where moths could settle down. Make sure to spray all cracks and crevices, no matter how small, during each treatment, as moths could hide in the smallest corners.

For the treatment of kitchen cupboards, first remove the food before spraying the inside. Wait until the sprayed surfaces have dried, then the cupboard can be filled again.

An even more natural control method

Trichogramma evanescens, a parasitic wasp species, is the natural enemy of the moth. It interrupts the life cycle of the moth by laying its eggs in those of the moth (whether clothes or food moth). Moths are therefore combated naturally and without chemicals.

There are thousands of species of ichneumoids and only a few are used to control moths. Other species fight for example scale insects or fruit flies. They are very popular and are widely used. Therefore, they are specially bred and can be purchased.

Trichogramma evanescens are very small, between 0.2 and 0.4 mm in size, so they are hardly visible to the human eye. This ichneumon cannot fly, only crawl. 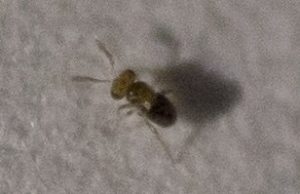 The small insects have a good sense of where moth eggs are hiding. With their laying spine they drill into one and lay their eggs in it. From this, further small ichneumons hatch, which eat the content of the moth egg and after a ripening period start looking for more eggs.

The big advantage is that you do not notice ichneumons because of their size. They do not sting, do not fly and make no noise. The life span is only a few days to weeks. And as soon as they don’t find any more moth eggs, they either disappear through the window or they die and decay to the smallest piles of dust.12

If moths affect our habitat and contaminate food, action must be taken. But in the wild, moths should be admired and respected, even if they are not as beautiful as butterflies. 😉