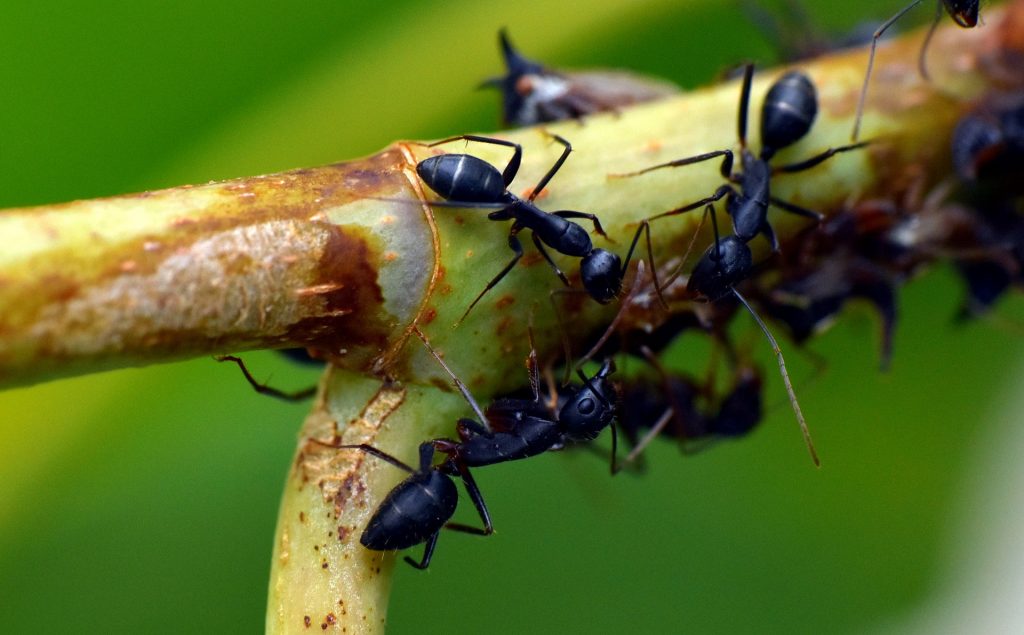 You can’t look that fast, and ants are already present and visit us at the family celebration on the terrace or fight their way into the kitchen.

Ants are an integral part of nature, and like almost all insects, they are a crucial part of the ecosystem, which would collapse without them. They undertake lots of essential tasks and we humans should be grateful to them and, if possible, let them live.

The benefits of ants

Among others, ants are irreplaceable for nature for the following reasons:

In principle, ants are not considered very dangerous, but some species can also pose dangers and risks.

The carpenter ant (Camponotus sp.) can cause just as much damage as termites because they build their nests in cavities, preferably in damp and rotten wood. In contrast to termites, carpenter ants do not eat the cellulose but dig tunnels in it. It is difficult to tell whether a house, hut or similar is infested. It would only be recognisable, for example, by piles of wood shavings that can be found, or if you hear an inexplicable soft rustling in the walls, it could be the ants digging through the wood.

Some species of ants can also pose a health risk. Basically, all ants can bite, especially if they feel attacked, and even if some bites do not hurt much, the bite marks can become inflamed if they are not appropriately treated.

However, some species of ants also have a stinger that injects poison. Depending on the species, this can be more or less dangerous. Symptoms include redness around the sting, swelling, pain and itching. Some people also have an allergic reaction to such bites, which can be life-threatening.3

Some ant species even rank among the 10 most painful insects in the world.
One of them is the Bullet Ant (Paraponera clavata), also known as the 24-hour ant, which lives in the tropical rainforest in South and Central America. According to the Dr Schmidt Pain Index, the sting of this ant is one of the most painful insect stings in the world. The pain lasts up to 24 hours. Symptoms include swelling around the bite, lymph nodes and neck.

A tribe in Brazil uses these Bullet ants for a ritual in which a boy can attain the status of a man. During this kind of ceremony many of these ants are sedated to work them into handmade gloves. As soon as the ants become active again, the boy must wear these gloves for 5 minutes and suffer many painful stings. The young man has to endure this pain 20 times within several months, only then he is acknowledged as a man of the tribe.4

Characteristics and properties of ants

More than 10,000 ant species have been identified so far, of which about 180 are native to Europe. Among the most famous ants are the Black Garden Ant (Lasius niger), the Yellow Meadow Ant (Lasius flavus), the Carpenter Ant (Camponotus sp.) and the Pharaoh Ant (Monomorium pharaonis).5

Anatomy of an ant

Basically, the ant’s body consists of the head, the thorax and the abdomen.

The head varies in size and shape depending on the species and carries the most important sensory organs, such as the mandibles, with which they can crush food, transport their prey and dig in the nest. Ants use their antennae to smell and feel. They are also very sensitive to pheromones, which are necessary for communication and organisation in the colony. But ants can also use these antennae to distinguish their own from other nestmates.

The vision of ant species with larger eyes is excellent, while smaller species living underground are also almost blind. Ants can also recognise colours, and their sensitivity to ultraviolet light allows them to see the pattern of polarised light in the blue sky, which helps them to orient themselves.6 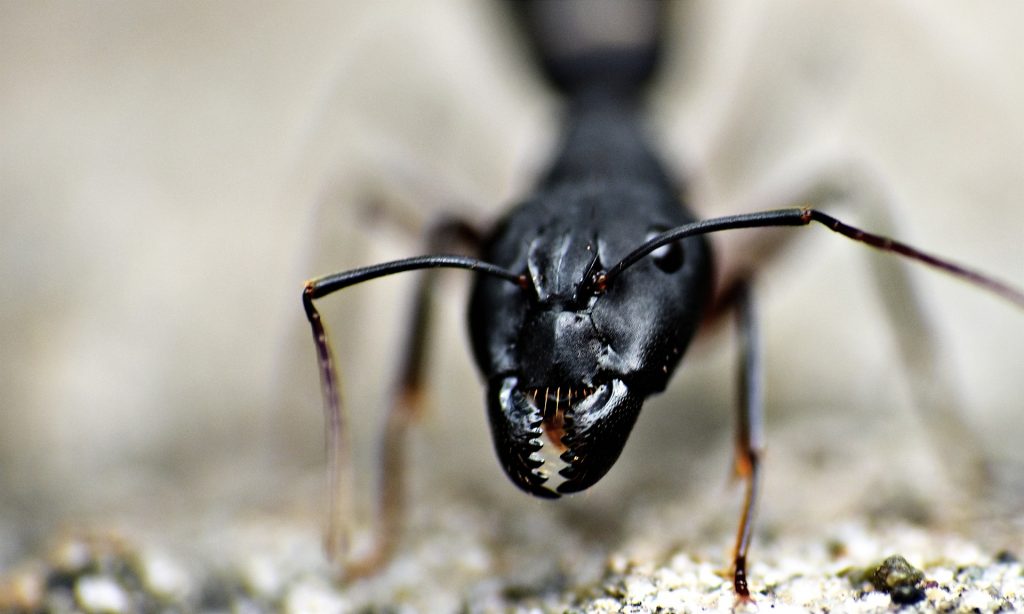 Ants are eusocial, which means that at least two generations live together. Within a colony, the small six-legged animals have different tasks, which are marked by three casts.

The queen, a fertile female, is responsible for egg production. She has wings, which she lays down after mating as soon as she has found a suitable habitat for her new colony.

The males are also winged but die soon after mating the queen.

The workers are wingless, infertile females whose bodies have different shapes and sizes depending on the task they have to perform. For example, the ants defending the colony and the nest (soldiers) have larger heads and thicker mandibles. Most workers, however, are active in the nest and clean, take care of the brood, or dig ways/chambers in the nest.7 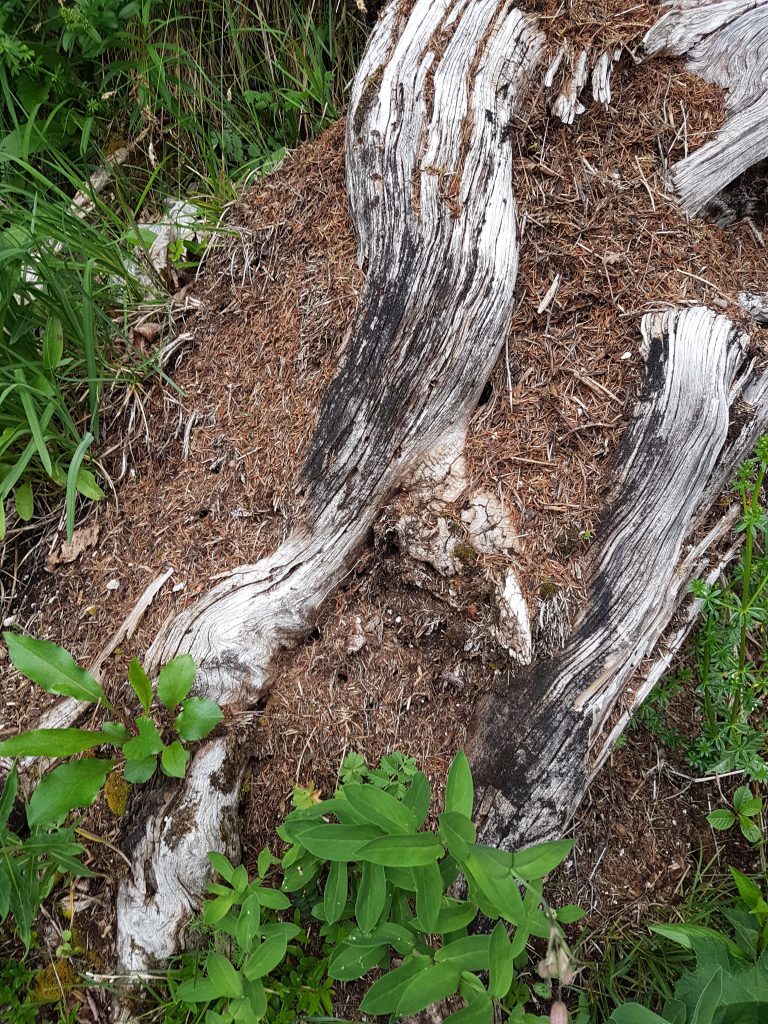 The Black Garden Ant (Lasius niger) is very well known and widespread in Europe, therefore we will describe this species a little more precisely:

Appearance: The Black garden ants have a black-brown body and are 3 to 5 mm in size. The queen grows up to 9 mm. This species has no stinger.

Life cycle: The queens of Lasius niger swarm out together with the males in the period between June and September and mate in the air at some distance from the nest (nuptial flight). Then the queens look for a suitable place to lay their eggs. Within about 14 days, they develop into larvae, after another 10 days into pupae, until they are adult after another 10 days. The entire cycle from egg to adult ant takes an average of 34 days. After that, the first worker ants already start foraging and building their nests.8

Habitat and food: Black garden ants often live under cobblestones and terraces and are therefore very common in populated areas. Like many other ant species, Lasius niger also like to feed on honeydew (sweet excrements of aphids) and eat other small insects. Black garden ants also like “human food” such as meat and sweets. The ants are active from spring to autumn, but indoors they can appear all year round.

Plague: Lasius niger can be very annoying in the house, especially in the kitchen in connection with food. In addition, certain types of fungi lead a symbiosis with the black garden ants. If these fungi occur due to increased moisture on installed wood materials, this can cause an increased occurrence of this ant species. The wood can also be damaged by the insects and endanger supporting parts.9

Since ants can make their way into our home quite quickly and unnoticed, joints and window edges should be well sealed because the smallest cracks can be an entrance for the insects. Especially during the warm months, it is recommended to keep food and leftovers locked up or to dispose of them in time.

To prevent an infestation or to get an acute problem under control, we recommend the use of our Bio/Clean Kill products.

It is worth spraying Bio/Clean Kill Classic every few weeks in the house or apartment evenly around window and door frames, in all cracks, joints, corners and edges, especially where ants like to walk or rest. Bio/Clean Kill (Extra) micro-fast can also be used in the kitchen, but food should not be sprayed directly.

Bio/Clean Kill (Extra) micro-fast can also be used on the table area and chairs on the terrace to enjoy the afternoon coffee in the sun.

For the campers and outdoor friends among you we also have a tip: To avoid annoying mosquitoes, ants etc. when camping, you should have Bio/Clean Kill (Extra) micro-fast ready to hand. 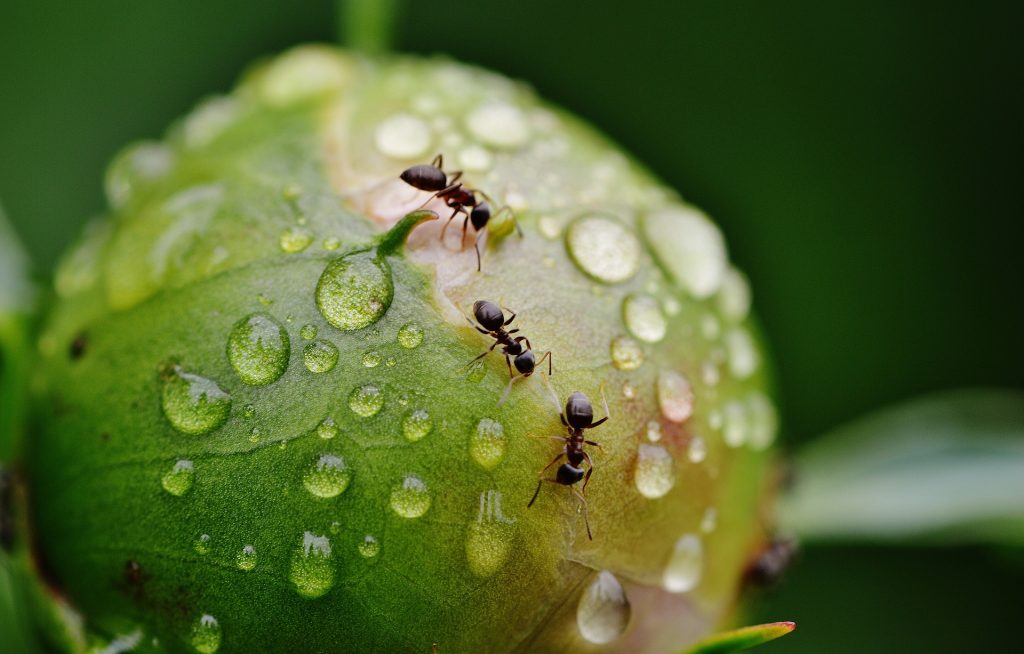 Ants on a bud ©Pixabay/Alexas_Fotos

Although ants are tiny, they show a considerable contribution in their work for nature. Leave them their habitat if possible and observe them for a while; they are fascinating!