F.Lima S.A has received the award ”Product of the Year” for BioKill Extra GT!

Consumers from various regions of Portugal were asked to participate in a survey conducted in 2014. Now in March 2015, results are in and BioKill Extra GT has been announced as the winner!

Scores were awarded depending on the attractiveness, use,  and satisfaction of the product. BioKill proved to be a clear winner in each category with the vast majority of participants opting for BioKill over its competition, “ZZPAFF”.

Jesmond would like to congratulate F.Lima and its crew for a fantastically managed and timed placement of the new product and technology into the consumer market! WELL DONE! 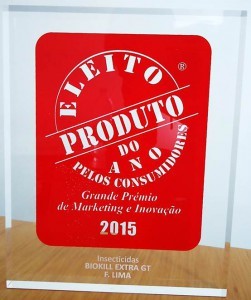